Are you a frogger?  After Andrew Turner’s most interesting and informative talk we will be using our ears rather than binoculars as we walk around Betty’s Bay’s wetlands. Particularly in the evenings, tune your ears to the sounds of an African night. Frogging can be a science or a recreation as we make exciting discoveries of these little creatures.

Frogs are classed as Vertebrate amphibians with two phases to their lives: the tadpole, and the four legged adult (amphi = two, bians = life). Toads are frogs, frogs are not toads!

With a few exceptions, frogs are nocturnal animals that can be found by tracking their calls after dark. You just need a reliable torch and a good deal of patience. They usually remain well hidden. Calls sometimes seem ventriloquial. Keep the direct torch light off the frogs. If they stop calling, remain motionless with the torch off until calling starts again. A number of calls can be heard from each species but it is the mating call most often heard, the male attracting females to the breeding site.

Toads are sometimes credited with the ability to predict rain as this is the most common stimulant to calling and mating. The Western Leopard Toad is a good example. Their distinctive snoring ‘call’ is awaited late August/September on still rainy evenings. Time to go out and rescue them as they cross roads to enter ponds and dams.

The Fynbos region is that area set between the Karoo and the Southern and Western sea shores. It contains 46% of the plant species and 28% of the frogs of Southern Africa. There is a high proportion of endemics mainly because of the climatic conditions and the varying habitats which range from coastal dunes to high mountains.

In the Western Cape there are 50 species of frogs. The following is a representative selection of Fynbos Frogs. 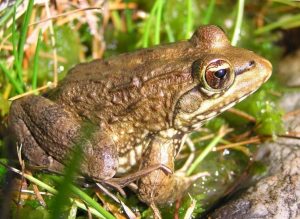 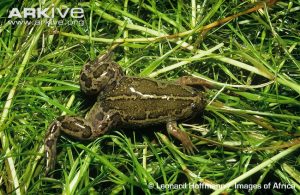 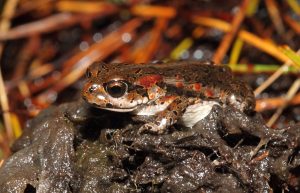 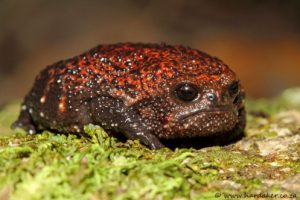 Regarding challenges to be faced, fires are one. Ages of cooling and drying means plants and animals need to adapt. But fires and climate changes have adverse effects on plant and frog populations. Fires happen more frequently now, mostly caused by humans. Frogs and plants need several years to reproduce. Invasive aliens alter the local water regime and habitat structure. Their fuel load is very high. Frogs have not evolved in the presence of alien vegetation. With porous skins, frogs are very sensitive to environmental changes.

Many fynbos frogs are small and unobtrusive, living away from streams in dense vegetation. We need to take advantage of the recent fires to do proactive fire management.

Thank you Andrew for helping us to look, listen, and with patience discover these beautiful creatures around us.

The City of Cape Town’s Table Mountain group is the oldest mountain range in the world. The ‘arms’ of this fault line stretch from Port Nolloth to Port Elizabeth and meet north of Cape Town. The Peninsula formation is a lower mountain range. This extended mountain range contains several aquifers within the folds of the formation. The overall range can be broken down into several formations:

Feasibility studies for alternative supplies of water are targeting areas around major dams, particularly Steenbras, Cedarberg and Nuweberg, while in the Peninsula formation the Helderberg and Sir Lowry’s Pass areas are being looked at.  Our area, the Kogelberg, was being considered but now is just down for monitoring in view of the importance of this ecological area.

Due to the fragmented nature of the geology the aquifers are regarded as good. An interesting observation of the Steenbras hydrogeology is in the fractures that don’t run in straight lines but like veins which break up into more fractures.

Various drilling methods are used. Percussion drilling uses a rotating hammer to open the way through very hard rock. Core drilling using diamond bits cuts a long cylindrical tube of rock which is lifted back to the surface.

Artesian discovery wells are currently being drilled in the Steenbras and Theewaterskloof areas – 13 having been completed at depths ranging from 134 to 370 metres. Another four are to be drilled possibly to a depth of 950 metres.

Ground water is critical for urban water supply security. This vital resource is important for the future but that time is now! The yield we have at present is failing due to climate change and rapid growth in urban population. These factors will remain with us as we move on to experience hotter conditions with lower rainfall in the western areas.

GOING UP IN SMOKE, the past present and future of the FRANKINCENSE TRADE

Frankincense oil is the common name for resinous extracts derived from trees of the genus Boswellia in the family Burseraceae.  Commiphera and Boswellia are known in the western world as frankincense and myrrh which are resins that come from Boswellia and Commiphera respectively. These species are generally known as ‘Kanniedood’ (never die) due to their longevity and resprouting ability.

Commiphera has about 200 species found in Africa and on islands off the east coast, the Middle East and Asia. There are about 13 trees or large shrubs in South Africa, with more in the Namibia and Caprivi areas. The sap is aromatic. Some northern species yield the resin myrrh, Commiphera myrrha. The resin of the Boswellia species has been used as incense in religious and cultural ceremonies, and in medicine, since time immemorial.

As we entered the hall to listen to Tony’s most interesting and informative presentation, we were greeted by the scent of the frankincense he had brought from Iman Botannical Garden where trees grow straight out of rock. There are 24 species of Boswellia, most occuring in fairly dry conditions. In Somalia, Boswellia frereana is known as ‘Maydi’, ‘The king of all frankincense’.  It is a wild harvested tree that produces an oil with balsam and citrus fragrance (at $53 for 15ml!).  Unfortunately this area is close to a military conflict zone between Puntland and Somalia and this factor has a large impact on its sustainability.

Boswellia sacra (sacred) is the most prized frankincense with widespread use in Catholic and Orthodox Churches. It was one of the gifts that the three wise men brought to Jesus. There is a wide range of commercial uses for Boswellia, both religious and medicinal. 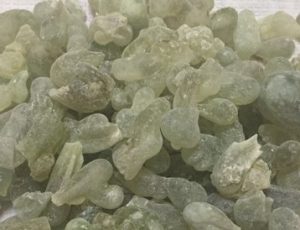 Could frankincense reshape Africa?  It is a remarkably drought resistant species that could help restore some of Africa’s lost woodlands. For years frankincense trees have faced challenges that could threaten their very survival. Grazing animals, grass burning, too frequent cutting, lack of regeneration, deforestation. Where our climate is similar, this species could help stimulate the local economy. It responds to a changing climate as it is good at trapping moisture to avoid damage from drought. In Ethiopia about 30% of household income is attributed to frankincense.